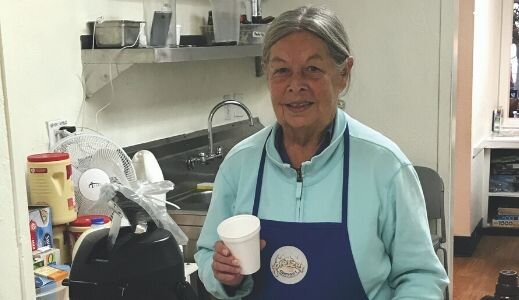 The Catholic faith is one of treasure, but it takes more to truly serve the community. Volunteers at Catholic Charities Diocese of San Diego (CCDSD) put faith in action by giving their time and talent beyond worship. Here are a few stories of volunteers who, by their accompaniment, are bringing hope, love, care and dignity to those who seek assistance through our programs. 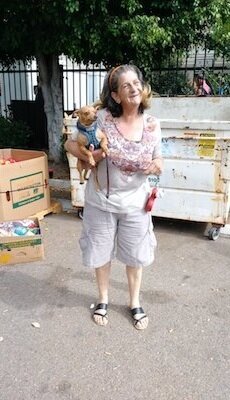 Mary and Pup, the “Gate Monitors”

Mary had been visiting our monthly food distribution at the Salvation Army in downtown San Diego, where she received commodities and saw an opportunity to help on a day when we were short-staffed. She parked her cart and pet Chihuahua alongside the distribution line while she helped to stock items. She said it gave her a sense of pride to give back and has been a regular volunteer ever since. Mary and her pup are now known as the “Gate Monitors,” ensuring the lines run smoothly and clients are quickly matched with a shopping assistant. 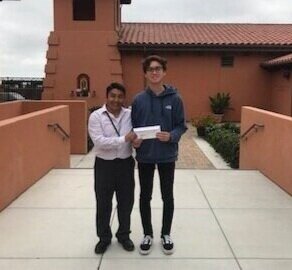 A senior at Sage Creek High School, Donovan took it upon himself to collect and turn in bottles and cans in an effort to save up $1,000 to donate to CCDSD’s La Posada de Guadalupe, a shelter for homeless men, farm workers, and disenfranchised people in the Carlsbad area. He had previously been collecting blankets and food for the shelter but wanted to do more. Donovan used his senior school project as an opportunity to raise $1,040 through recyclables.

“I would probably be buried by now if I had not gotten the help I did here,” says Arlene, as the early morning light peeks through at Rachel’s Women’s Center, one of several CCDSD programs for homeless women.

In 2018, Arlene fell ill, leaving her hospitalized and without sufficient income to live independently in San Diego. She was able to not only recover from her illness, but also regain her independence by transitioning to Rachel’s Night Shelter, and, finally, to our Casa Maria permanent housing. Arlene now shares a home with three other women, riding the bus to Rachel’s Day Center each morning to welcome in homeless women—many of whom have slept on the streets at night—for hot coffee and words of encouragement.

When San Diego opened the doors of its migrant shelter in late 2018, Ruth was one of the first volunteers to transport and assist those seeking asylum. Many migrants arrive to reunite with family members outside of San Diego, making her time with each family a brief encounter. But one family had plans to stay.

Ruth took Emanise, a single mother, and her three young children—daughters Diana and Betiana, and son Danilo—to their first doctor’s appointment, per protocol. As CCDSD began to work more closely with the family, Ruth offered to continue transporting them. She developed an ongoing relationship with Emanise and the kids while assisting with school registration, errands, and additional advocacy for Danilo, who has special needs.

“They’ve taken me in as part of their family, too,” Ruth said, recalling an especially touching moment when she drove them to Coronado. It was the first time they had seen the ocean in their new country.

“Diana and Betiana were dancing on the beach and chasing the waves.” Ruth said. “I could see the joy in Emanise’s and Danilo’s eyes. They were all elated.”

Thanksgiving and the holiday season remind us even more so that our impact across San Diego and Imperial Counties would not be possible without the generosity of our volunteers and donors. We graciously thank all who support CCDSD. To volunteer your time and talent, visit https://ccdsd.org/volunteer.