(All photos without masks were taken prior to COVID-19)

They say grief happens in stages and everyone heals in their own time. The loss of a life partner, a soul mate, and best friend is a different, deeper, and more devastating kind of pain. Losing a part of your existence changes you and guts you to the core.

At home in New York, his best memories became haunting, so Henry started running, trying to stay in front of his thoughts, memories and everything that took his very breathe away. Texas couldn’t heal his heart. Vegas couldn’t distract his mind. A random bus ticket brought him to San Diego, where he now lives and works—and where he almost died. Grief and loss had jettisoned Henry across the country, into countless churches, through severe depression, to attempted suicide. It wasn’t until the brink of ending it all that he found a place where he could see—and, more importantly, feel—the first signs that he had a life worth living.

After his wife died of breast cancer, Henry’s own life flashed before his eyes. It was a reel he couldn’t stand to relive. He remembered dealing drugs as a teenager in the Bronx, and all of the wrongdoings that job required. He did it to help his mother, thinking it was the only option to survive in the projects.

“I lived a wretched existence,” Henry said. “I was a bad person and ran around with bad people. I was only trying to make a life, but it destroyed my life.”

A judge gave Henry a lifeline, the option to be sentenced to boot camp instead of prison. Henry chose boot camp, and it worked. He removed himself from the streets and later joined the military, where he served for eight and a half years. By the time he returned home, he was married with four kids and a bright future. Leaving his past and indiscretions to be a part of his history and not his future.

“That was when life was getting right,” Henry said. “And then I got the news that my wife needed chemo for breast cancer. It took both of her breasts, half of one of her feet, and eventually her life. The last time I saw her, she didn’t look anything human. It sent me over the edge.”

Henry had done everything right with his second chance, succeeded, and then had his other half taken away in a gruesome death. The vivid details were what disturbed him the most.

For someone coming from the dense metropolis of New York City, entering the suburban sprawl of Southern California can feel like being dropped onto another planet. Henry thought the change of scenery might help him restart. It did, but not before the pain and despair evolved into a cavernous loneliness. When he arrived in San Diego, Henry walked from the bus stop and checked into a nearby motel in Old Town. He soon realized he had no way to get around and nowhere familiar to go. He had no connections. No family. He knew nobody; worse, nobody knew him. He was mostly bunkered in, except for going to church on Sundays. Even there, he felt nobody could save his soul.

Displaced and distraught, Henry purposely overdosed on drugs. “I just wanted to go to sleep and not wake up,” he said.

Neighbors heard Henry throwing up and found him barely responsive. They called an ambulance that took him to a hospital downtown. The hospital later transferred him to a crisis center in Escondido, where he stayed for 21 days, the maximum length allowed.

Recovering at La Posada
Given a list of places to seek help and shelter, Henry chose La Posada de Guadalupe, Catholic Charities’ homeless shelter for men and migrant farm workers in North County San Diego. He still felt lost. But this time, at this place, in the Carlsbad countryside, his broken path would begin to straighten.

“In order to start again, one must have a foundation,” Henry said. “La Posada became my foundation.”

The staff at La Posada were not Henry’s caretakers, but rather, his support system. He admits he gave them a hard time at the start. He felt like he was stranded, treading in the Pacific Ocean. He was pulling himself together, yet on the verge of falling apart. His strength—with the support of La Posada staff—prevailed.

Through La Posada, Henry truly integrated with the church and gained the spiritual connection he had been seeking throughout his troubled journey. He attended training courses and career workshops. He did chores at the shelter. He upheld responsibilities. He walked and took buses to interviews. And soon, he secured a job at a nearby resort.

Stabilized Struggle
Henry was on the cusp of another major breakthrough when the coronavirus pandemic shook the stability that he had worked so hard to attain. His plans to move into his own housing fell through, landing him back at La Posada.

Then, his work dried up. Henry went from making $22 an hour in events catering to $14 an hour in housekeeping. He expects he won’t get back to his previous wage until spring at best, and probably closer to summer, when ballrooms and banquets could conceivably return. He’s up for the hustle and proudly points to the review app Yelp, where guests praise his charm and charisma.

“Henry was super friendly and welcoming in the pool area,” one guest wrote.

Another said, “Henry, at the pool, was so friendly and kind.”

Yet another, “…the house manager HENRY was very friendly and helpful throughout our entire stay he made the vibes for our weekend amazing.”

He’s beaming on the outside, yet still hurting on the inside. Recently, Henry has had to face another great loss, his ailing mother in North Carolina passed away. It has been yet another traumatic loss in his journey and it was a rattling reminder of his previous loss.

Henry shared that “even though we were there social distancing and saying goodbye, our family was closer that ever, that is what momma wanted, our family together.”

I have again spoken with Henry and his faith is stronger than ever. So is his will. He thinks about his wife every day, but he can now live with the memories devoid of the nightmares. Those memories are also now of his mother and their special times together. It is a very lonely time with the pandemic, burying another woman in his life but, Henry is thankful that she is now in a place where there is no more suffering, no more worrying and pain. It also lifts the worry and stress that he endured watching his mother suffer. 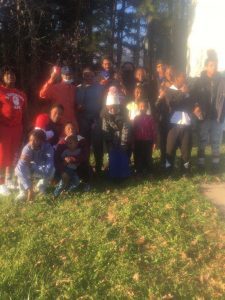 Henry with his family celebrating his mother’s life

Henry talks about the strong support he has, strong faith and belief that God wants him to be here and live his life. He envisions becoming a supervisor at his job, finding a home, and visiting his children who are now grown. He won’t go to see them until he feels fully grounded. He doesn’t want to be a liability.

“This is my third chance, which means there’s not another chance for me,” he said. “I’m going to make the most of what I’ve got left.”

Asked to describe La Posada, the homeless shelter where he restarted his life, Henry responded:

A circle of support.

The greatest organization I’ve ever encountered.”