The Hands That Feed Us

In this California border town, migrant farm workers line the streets at night in hopes of getting hired for the day. If they’re chosen, the bus leaves now and work starts by sunrise. 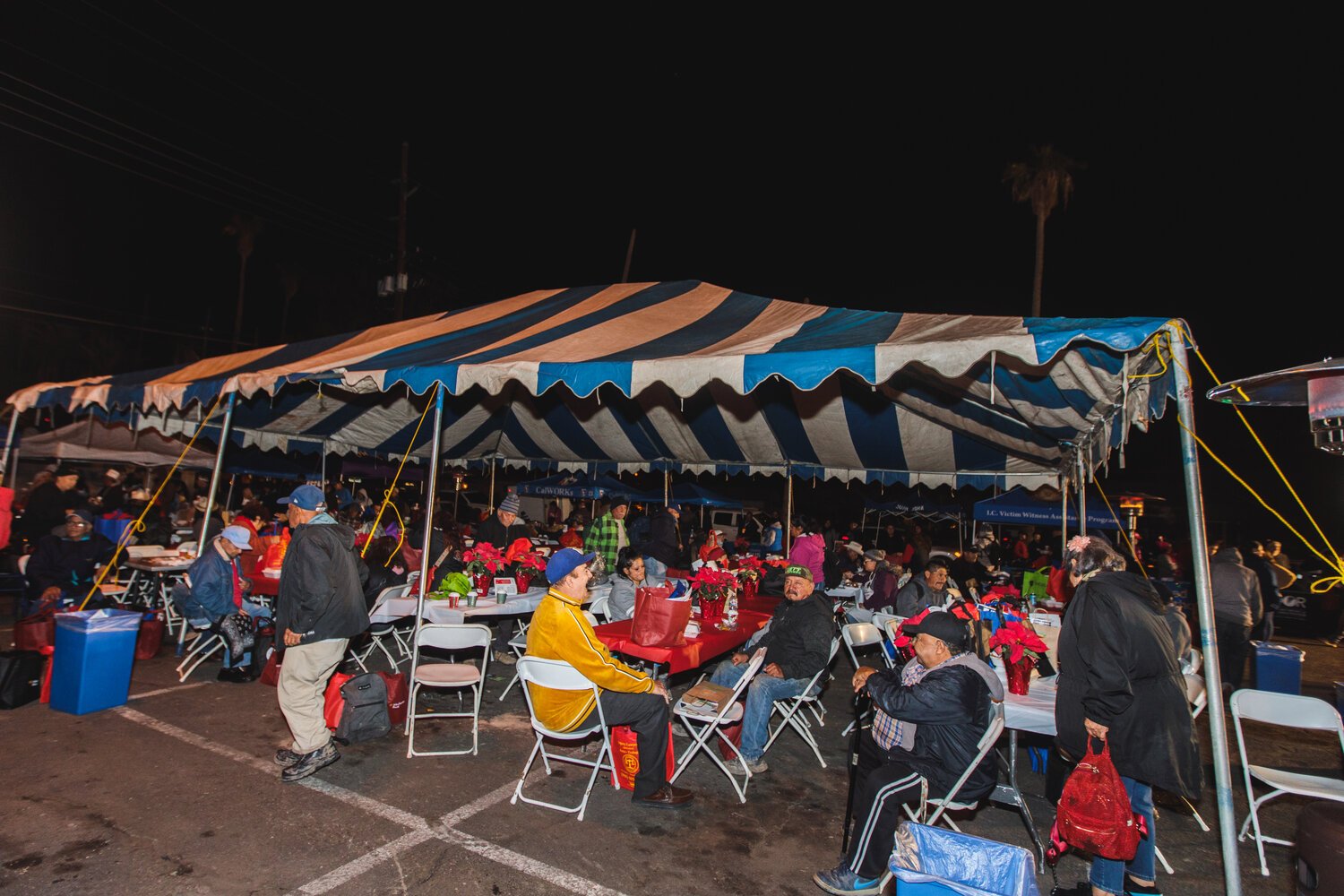 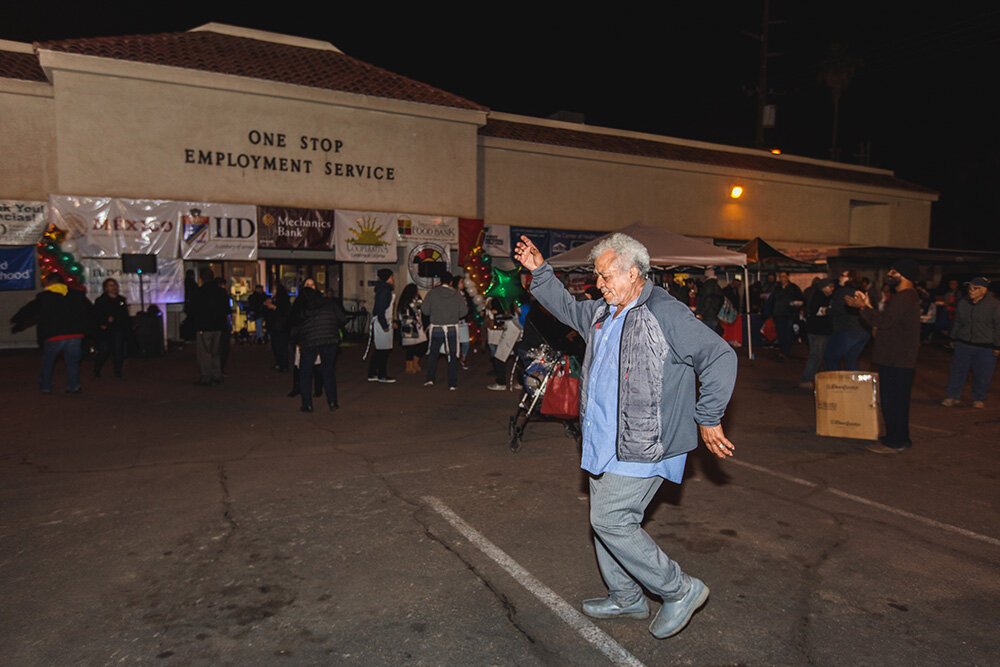 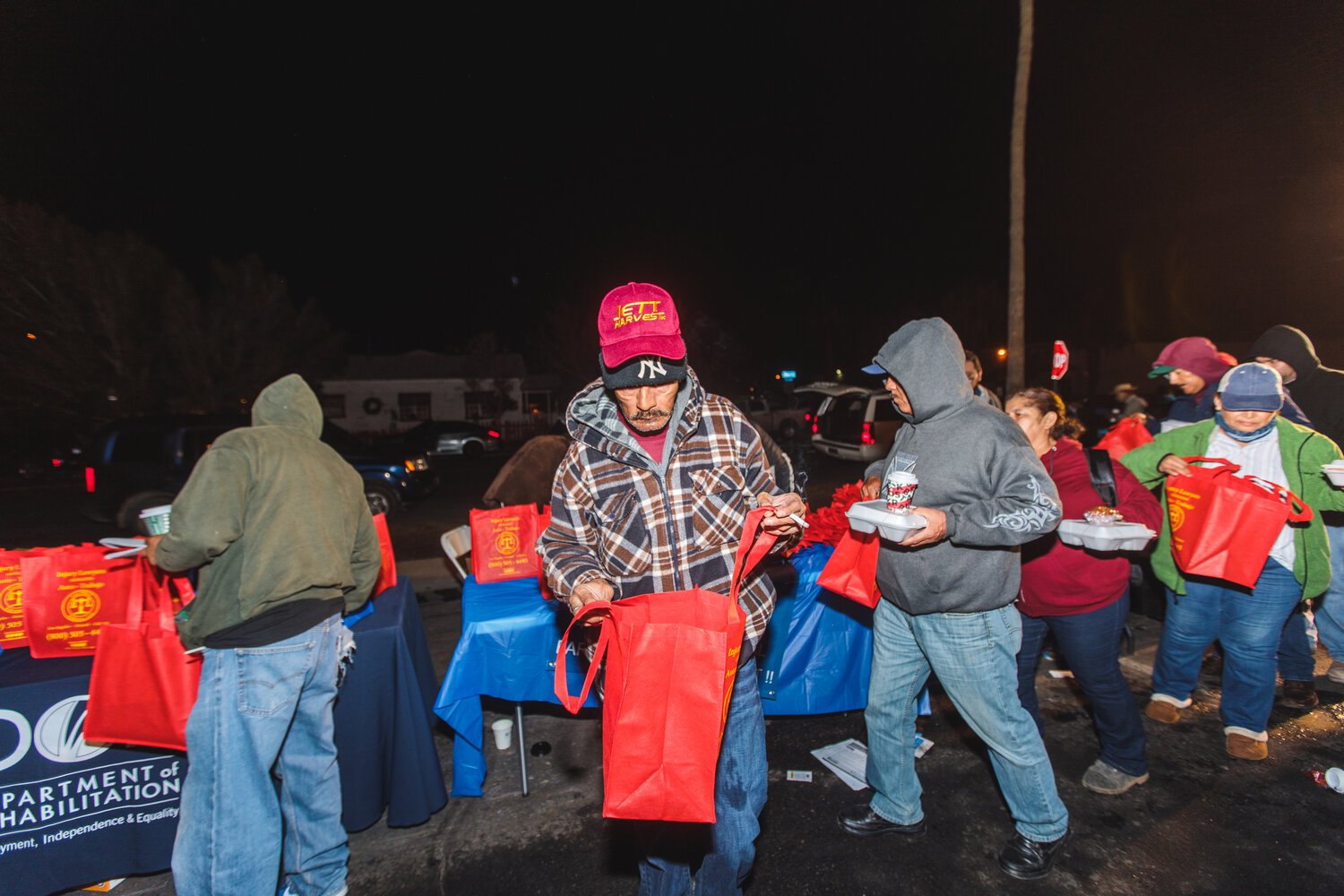 It’s the most perplexing party for an outsider. Thousands of migrants are in a large parking lot, being served a full breakfast—tamales, beans, salsa, sweet bread and coffee—at midnight on a brisk December morning. There are two musicians keeping them entertained, alternating between Mexican and American songs.

The performers are seated in front of an office building. The sign above them: One Stop Employment Service. The attendees compass the lot, visiting tents and tables to receive informational pamphlets while juggling their breakfasts and belongings. By 1 a.m., people are dancing. The event peaks around 3 a.m., when many seem to be leaving, but technically continues until 5. 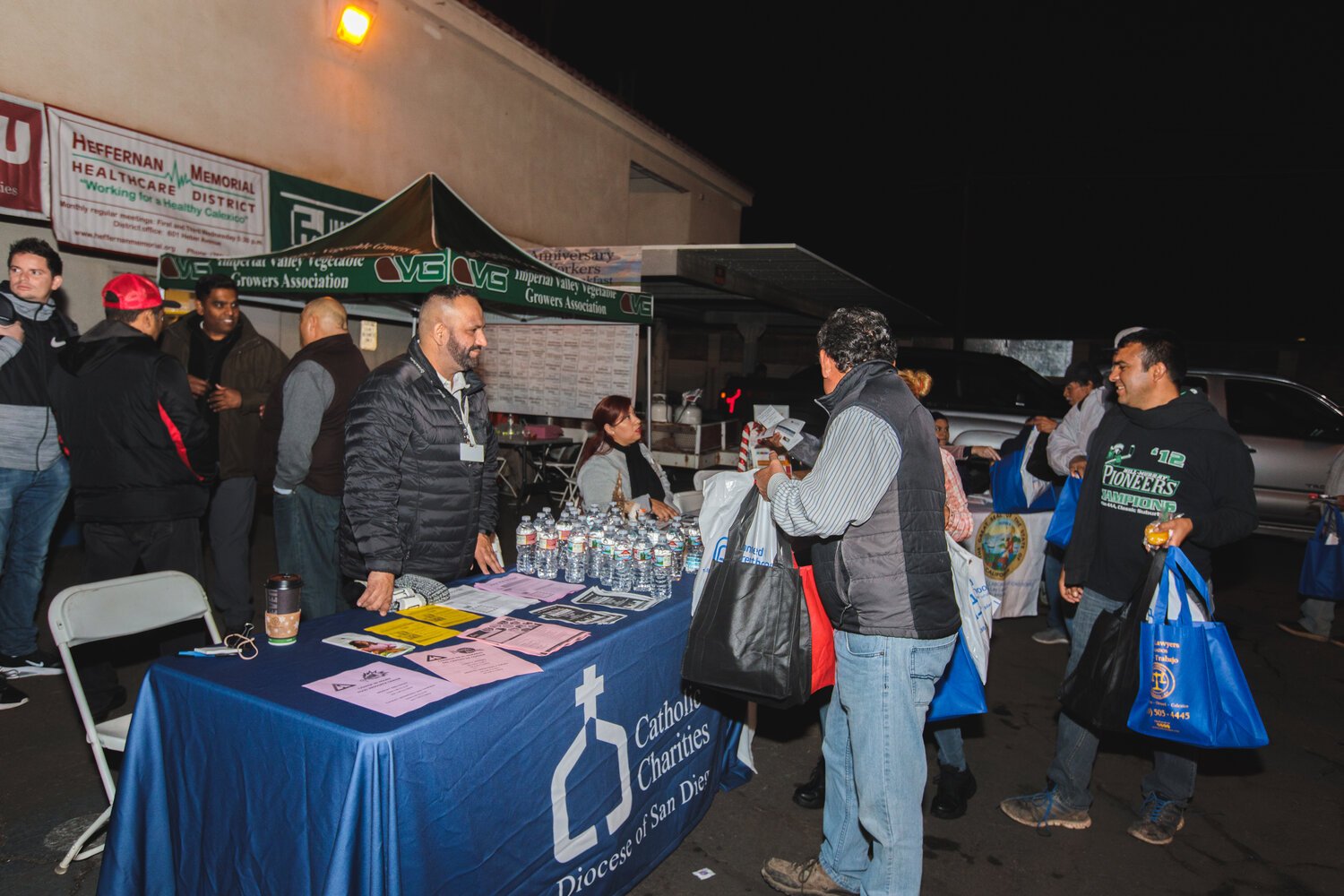 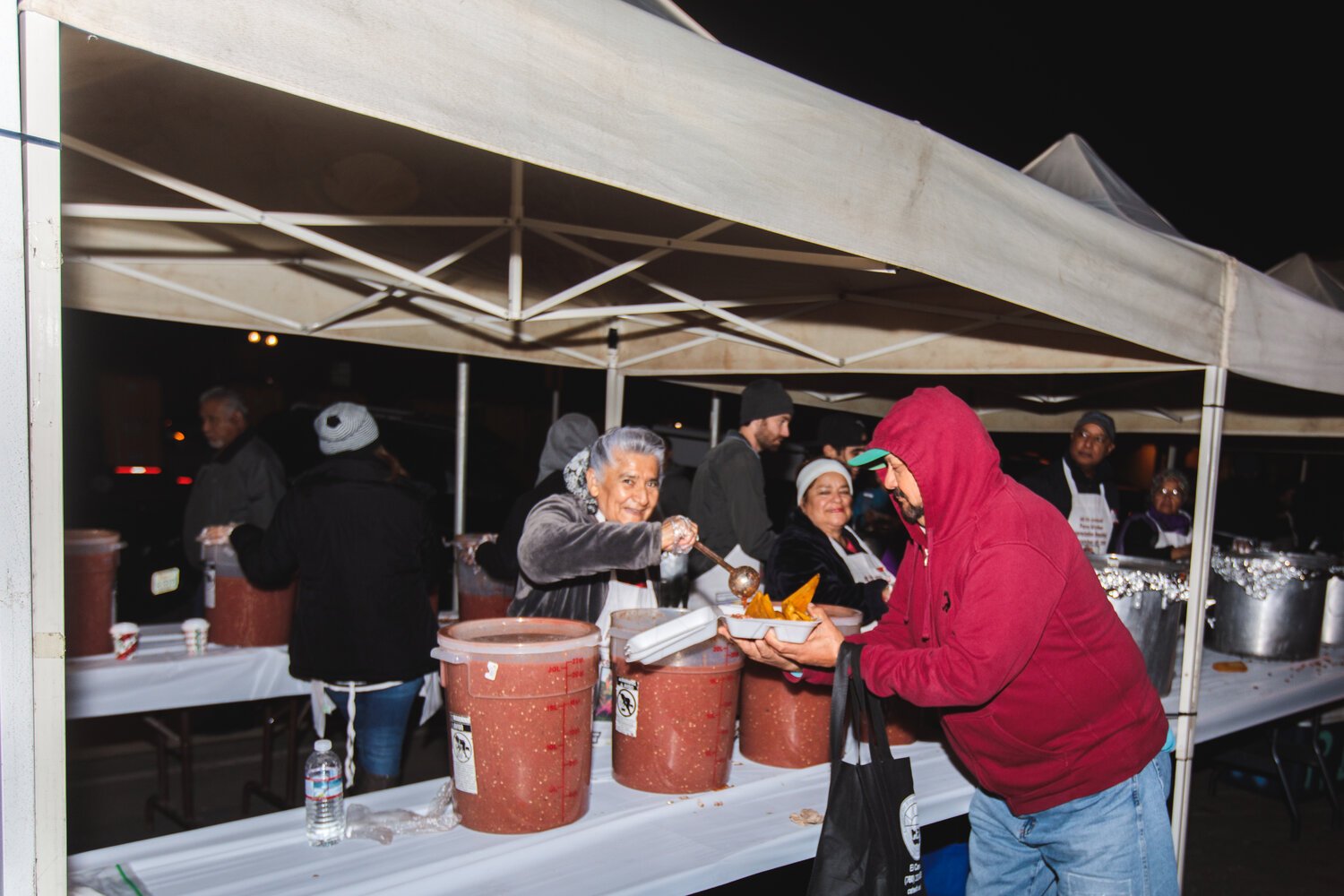 The tradition began in 1979 with coffee and sweet bread. The City of Calexico, the Calexico Chamber of Commerce and the Farm Worker Services Coalition of Imperial County (FWSCIC) became sponsors in 1985, with the Center for Employment Training (CET) joining a year later. Today, the support has grown from other local community organizations such as Catholic Charities Diocese of San Diego.

In most towns, the overnight crowd of 3,000-plus at the Farm Workers Appreciation Breakfast would be an anomaly. In Calexico, it is not. The streets are like this every night—minus the music, food and celebration.

Many Migrant Farm Workers in
California Are Quietly Homeless

Calexico is often viewed as the backyard of its border neighbor, Mexicali. Migrants cross from the bustling metropolis seeking higher (despite minimum) wages. Many hold temporary work visas or green cards. One of them is Edgar, a young, energetic man in his early 30s. Another is Martin, who has been doing this for as long as Edgar has been alive.

During the growing season, Edgar and Martin are among the many farm workers residing at Our Lady of Guadalupe Shelter, a homeless men’s services facility operated by Catholic Charities Diocese of San Diego. It’s the only homeless men’s shelter in Imperial County and one of just three in all of California where farm workers are able to stay.

“Why are you up so early?” Edgar asks.

I tell him that I want to experience a day in his life and share his story. Upon translation, Edgar nods in approval. Martin smiles and takes a slow sip of coffee. 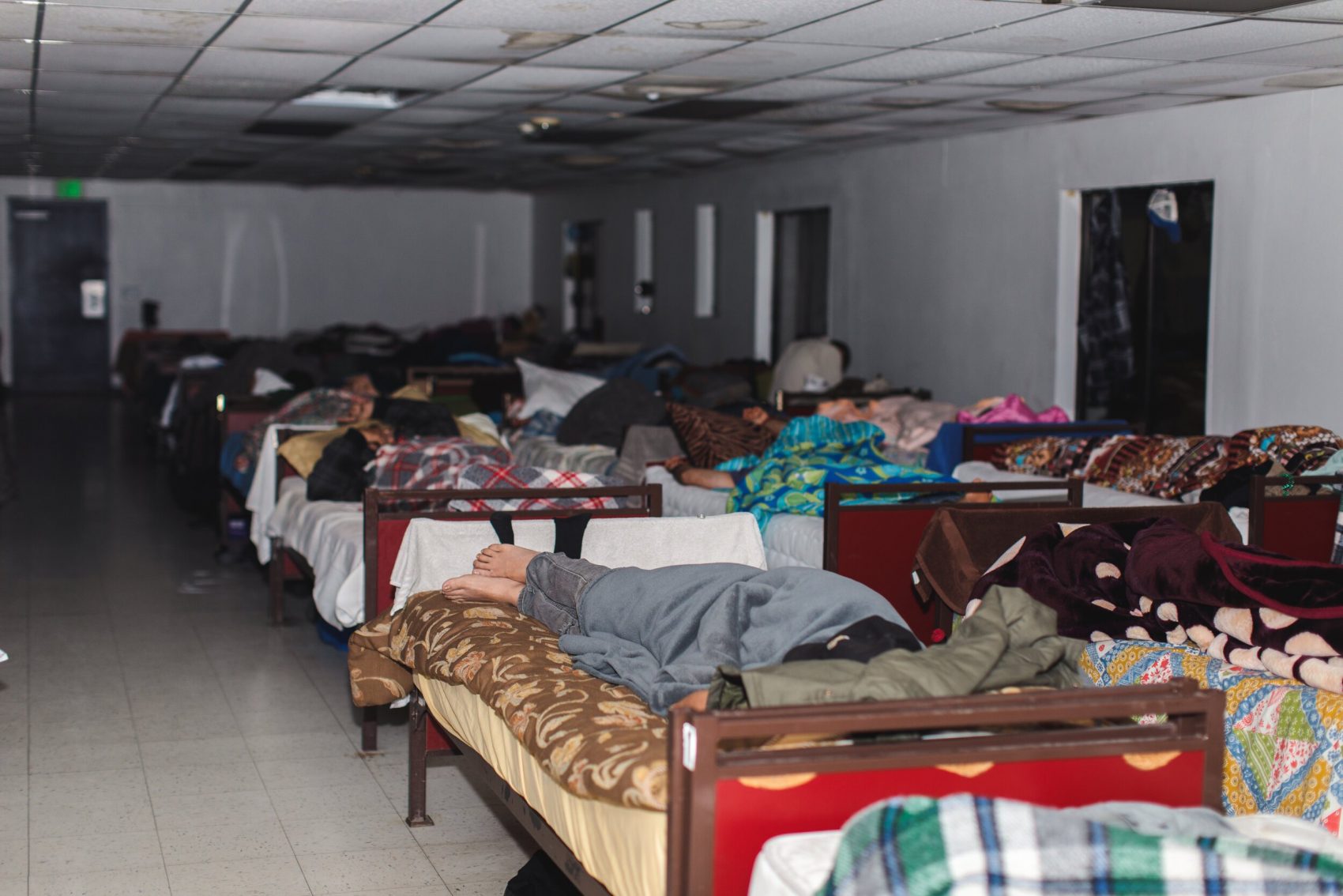 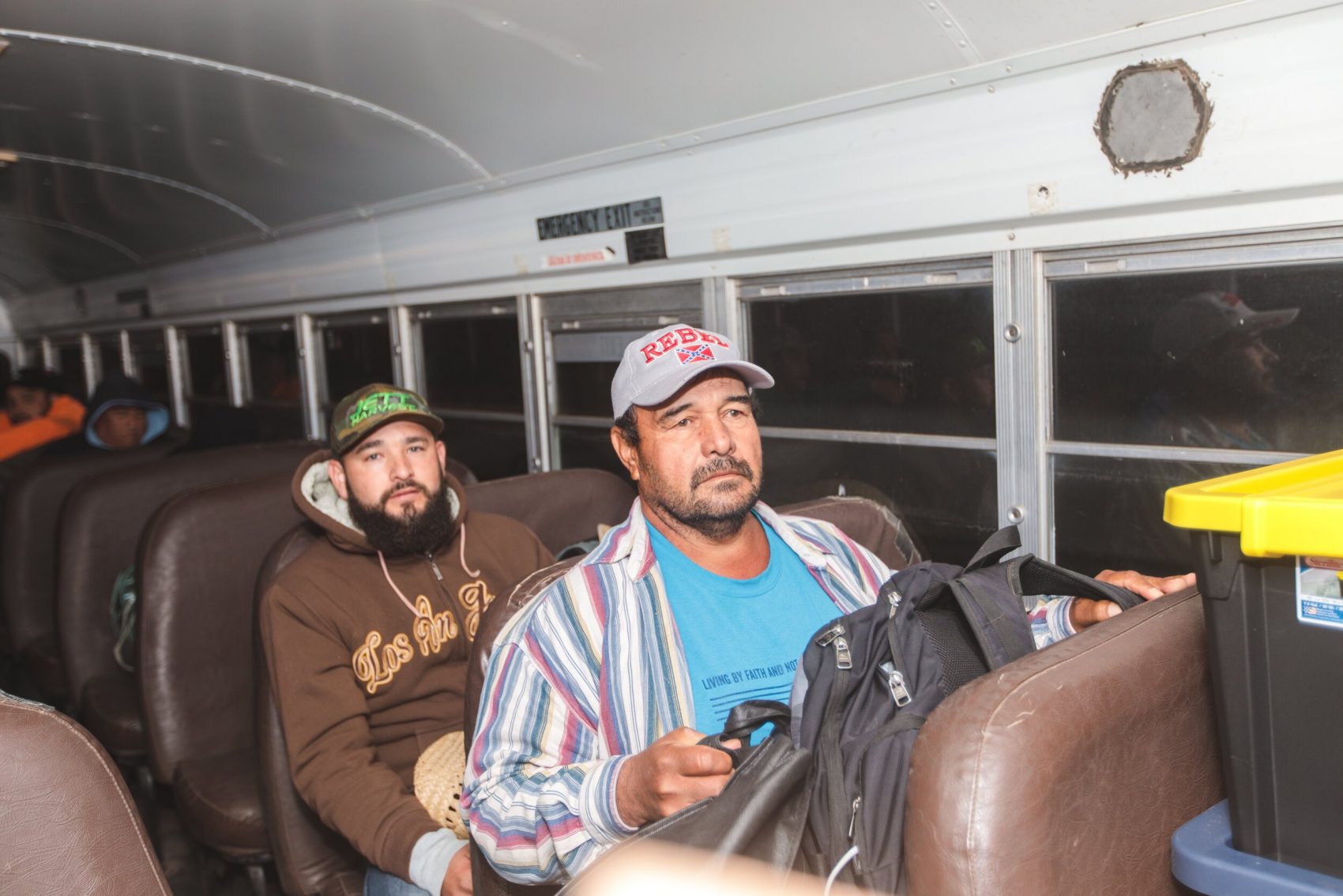 “People can see how hard it is to work in the fields,” Edgar says. “And how little we make.” 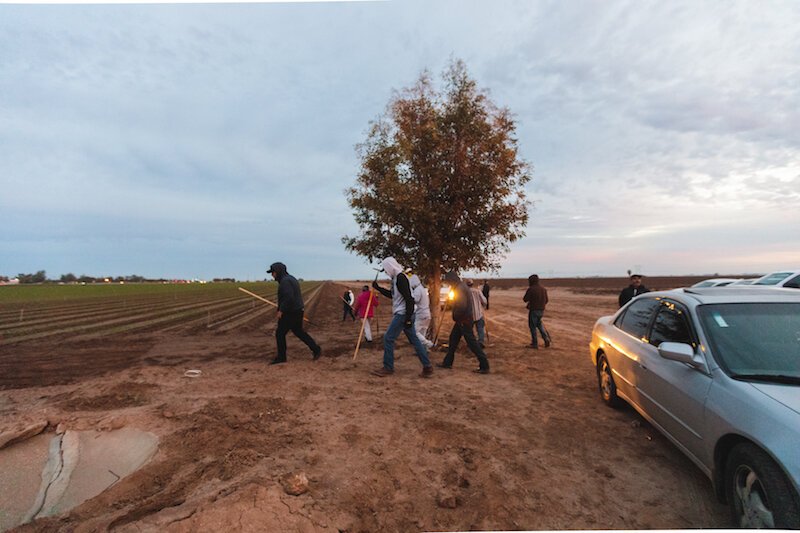 For most of Imperial County’s seasonal farm workers, the commute begins the evening prior. They arrive on the Mexico side of the border by 8 or 9 p.m., waiting in line for two, sometimes three hours to cross into the U.S. They will then have three or four more hours to wait before farm contractors at buses stationed in Calexico hire and transport workers for the day. It’s an all-nighter, followed by a full day of work. Some cross back into Mexico for a few hours of sleep each afternoon, whether at home, in a motel, or in an alley. Others become accustomed instead to living on the streets of Calexico.

Farther from the border, migrants resort to horrible living conditions equal to or worse than homelessness. “Some farm workers sleep in cars, motels, garages, converted school buses and, reportedly, even chicken coops,” one article states. “Many more share apartments with strangers, sometimes dozens of them, leading to public health concerns.” Surveyors in Salinas Valley found about 40 people lodged into a three-bedroom, two-bathroom home.

Our Abundance Comes From Them

Over a third of America’s vegetables and two-thirds of the country’s fruits and nuts are grown in California, according to the California Department of Food and Agriculture (CDFA). The Golden State’s rich agriculture industry produced more than 400 commodities for nearly $50 billion in cash receipts in 2018, accounting for over 13% of the nation’s total agricultural value.

The Imperial Valley, despite its desert landscape, is one of California’s most bountiful growing regions, thanks to mild temperatures from October through April and irrigation supplied by the Colorado River. Imperial County’s gross agricultural production in 2018 was valued at over $2.2 billion. While the top commodity is cattle, Imperial County also produces significant yields of alfalfa, lettuce, broccoli, onions, spinach, carrots, celery and many other crops.

Edgar and Martin could be bused to any farm on any given day—as close as El Centro (15 minutes) or as far as Fresno (6-7 hours). Yuma, Arizona (1 hour), is a possibility as well. If they aren’t selected by a contractor—or if it rains too hard—they’re out of work for the day, uncompensated. During the summer, they return home to Mexico. The family time is much needed, but so is the money.

“When you come from Mexicali, this is your life,” Edgar says. “It’s either 200 [Mexican pesos] there or 80 [U.S. dollars] here. What you get paid in Mexico for one day, you get paid in California for one hour.”

He responds, “For my family.”

Edgar explained how his father would always tell him to go to school, but that he never listened because he needed to make money to survive. He started working in the fields. Then, in a factory. And inevitably, back to the fields. Edgar has four children, including a three-month-old daughter.

Martin, wearing a hat embroidered with the word “Rebel” and the Confederate flag, lets Edgar do most of the talking, occasionally closing his eyes for a few seconds. Martin is a father of three and grandfather of eight.

Catholic Charities’ Our Lady of Guadalupe Shelter eliminates the back-and-forth border crossing for Edgar, Martin and others. Still, they must walk to the buses at 3:30 a.m., six days a week, with the possibility that they may not be hired. When they return to the shelter from a day of work, they shower and call their families before going to bed. There is no entertainment. They’ll even skip dinner if they’re feeling too tired. “Sometimes, rest is better than food,” Edgar says. 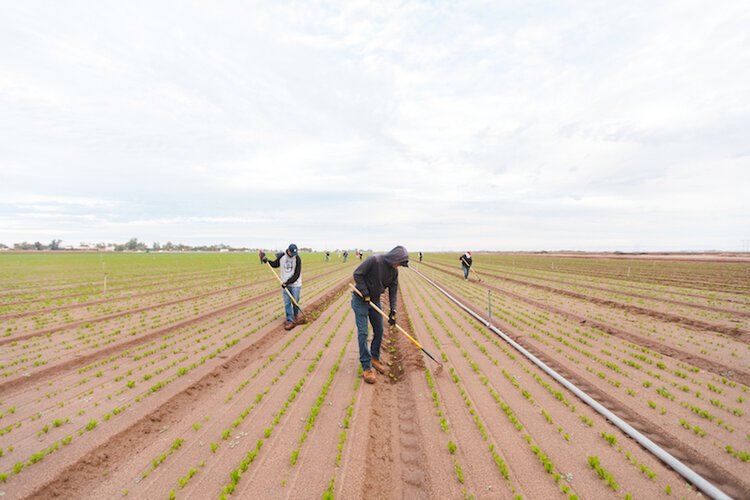 Like its farm workers, Imperial County is struggling. The Los Angeles Times wrote:

“As California has rebounded from the Great Recession, the Imperial Valley has largely defied attempts to expand its economy beyond seasonal farming and government work, and the county continues to suffer the highest unemployment rates in the state.

That’s the highest unemployment rate in the nation, and though it is the core of the county’s despair, it is also only the beginning. California’s housing crisis is ever-apparent here, with one in four residents living in poverty. The Mexican drug cartels’ proximity—if not presence—is chilling. And the New River flowing between Calexico and Mexicali has been described as a “pit of infection” because of “noxious sewage filled with feces, industrial chemicals and other raw waste.”

The scenery is stark, the summers are scorching and the people are poor. Still, migrants want to be here for the work.

Edgar and Martin compare the same distinct bumps on their thumbs—almost as if they have extra joints—from harvesting the produce that we eat. They describe the dangers of carrying sharp tools in the fields and the drawbacks of farming certain crops. Onions require them to begin working at midnight. Lettuce fields can leave them submerged to their chins in cold water. Celery must be measured by hand and swiftly sliced to fit the size of its packaging. There are accidents, injuries and illnesses, but nothing stops or slows the labor. These are the jobs that many of us could never do.

Today, Edgar, Martin and more than a dozen other migrants are at an organic lettuce farm in El Centro, the county seat and cradle of agriculture in the Imperial Valley. Just before dawn, the group trudges to the rows of romaine. They work the land in a line, down and back, racing machinery and each other, for 8 to 10 hours with a short mid-morning break. The task at hand—removing smaller sprouts so that the more promising ones can thrive—is repetitive and rhythmic, while posing just enough variation to demand focus with the physicality.

“The day we stop working will be the day that we are very sick,” Martin says.

Edgar laughs, “Still you will go to work.” 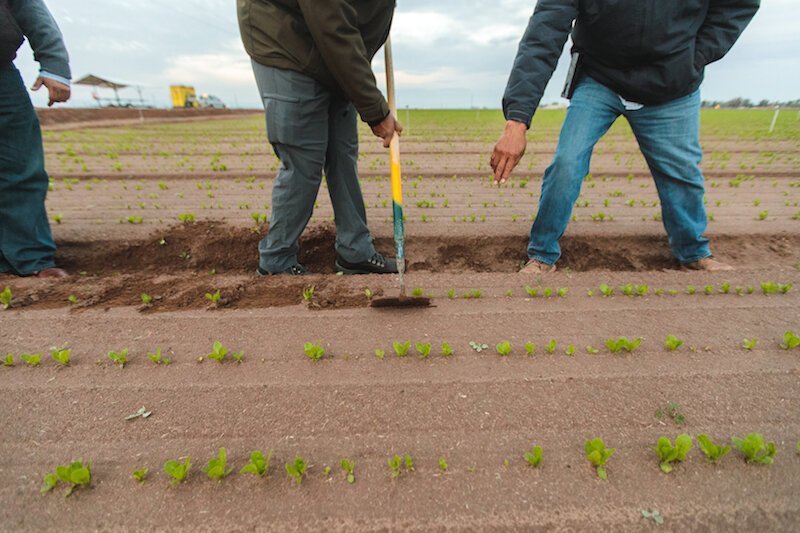 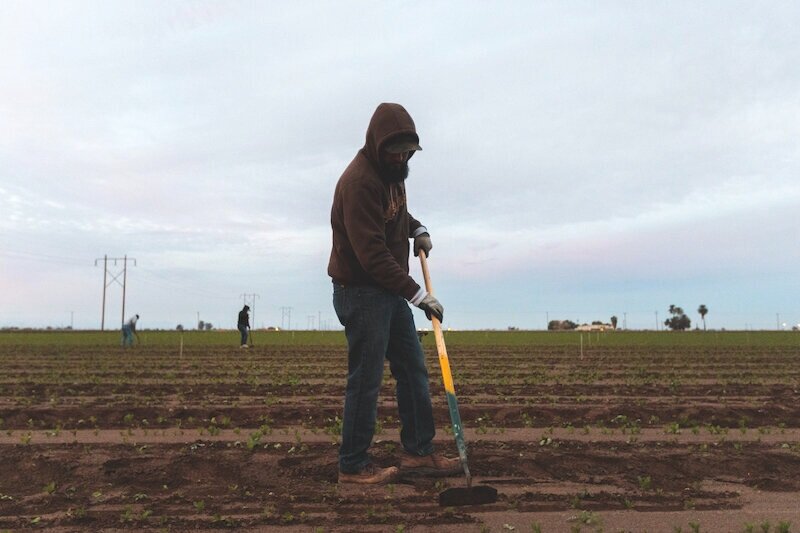 The Farm Workers Appreciation Breakfast in Calexico recognizes the hands that feed us annually. Meanwhile, its many sponsors provide migrant farm workers with the services and support they need daily. See how you can contribute. 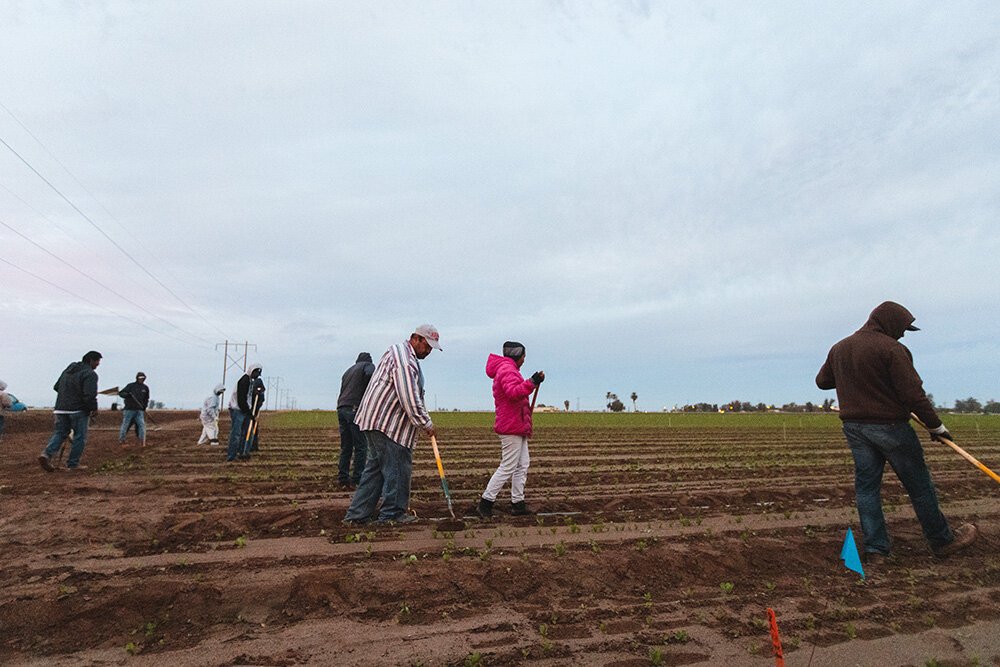 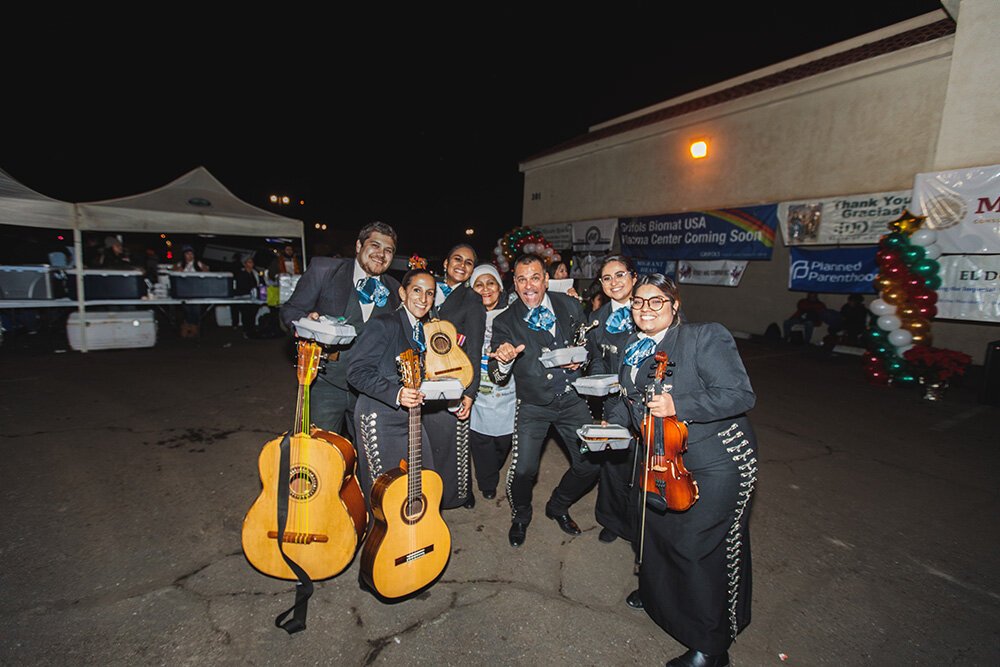 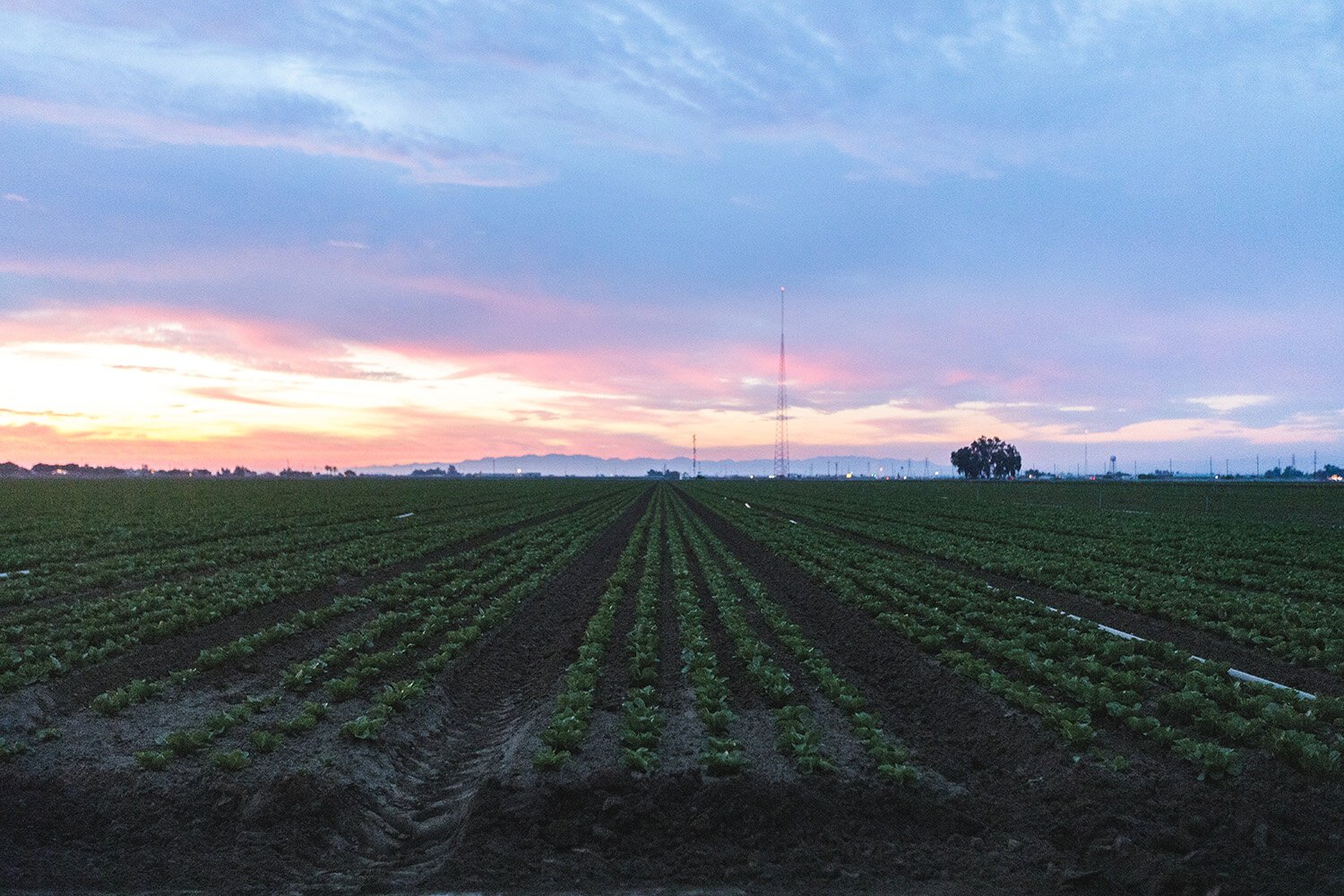 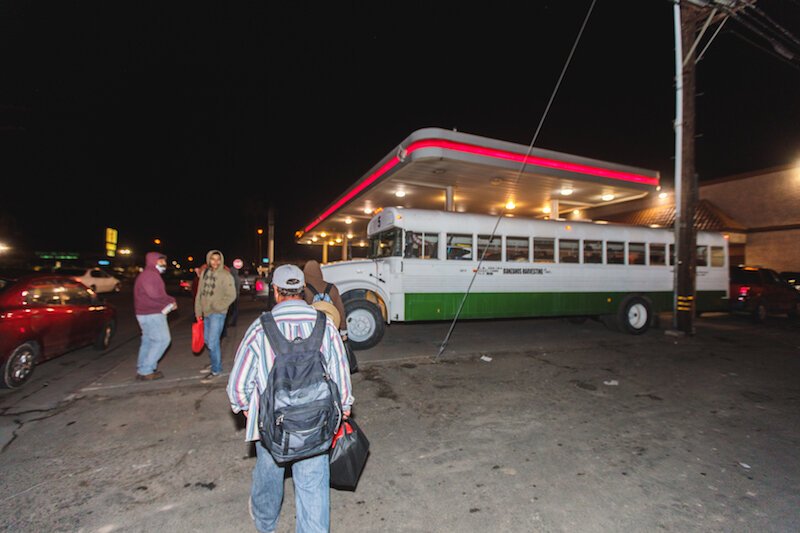 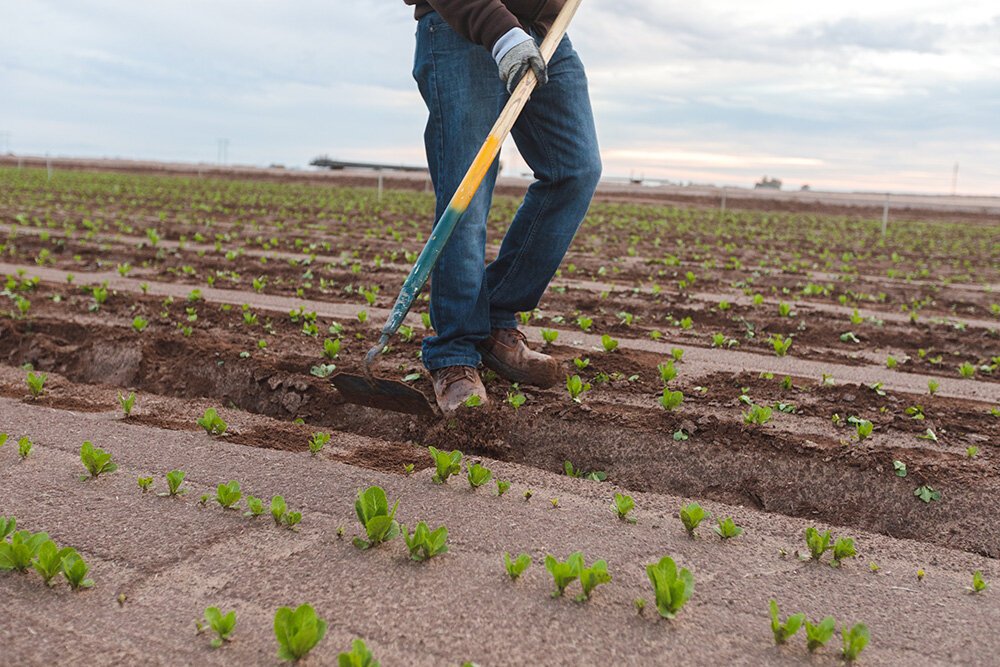