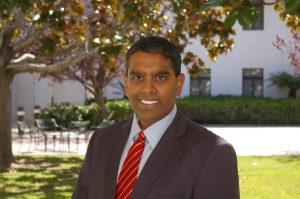 Vino began serving as the Chief Executive Officer of our Catholic Charities in October 2018, overseeing the agency’s programs in both San Diego and Imperial Counties.

Vino’s life journey has uniquely prepared him to steward this vital ministry. Born in Chennai, Tamil Nadu, India, Vino grew up in a Catholic family. The traditions of his faithful family lead him toward a professional career as an attorney in the footsteps of his father and grandfather. He practiced law in India for five years before moving to the United States to continue his professional and personal development.

From 2000-2002, he attended the University of San Diego School of Law on scholarship, earning a Master of Laws degree. For six years, beginning in 2002, he worked at the law firm Higgs, Fletcher & Mack. In 2006, Vino discovered his heart’s passion for nonprofit work when he co-founded the Housing Opportunities Collaborative (HOC) in San Diego to address the growing predatory lending practices and evolving housing crisis. During his time at HOC, Vino also created the Virtual Counselor Network (VCN) to improve the delivery of counseling services to the community through technology. As the first executive director of HOC from 2008 through 2017, he grew the organization’s revenue and expanded the organization across California. In 2016, he successfully graduated from the 18-month intensive Achieving Excellence in Community Development program at the Harvard Kennedy School of Government. He was the CEO of a real estate development company based in Florida, before the job opening at Catholic Charities inspired his return to the nonprofit sector.

With “a nonprofit heart and a for-profit mind,” as Vino describes it, he connects deeply to the mission of Catholic Charities by ensuring our agency has robust financial with triple bottom line framework, SMAART goals, and organizational means to live out it’s calling with excellence.